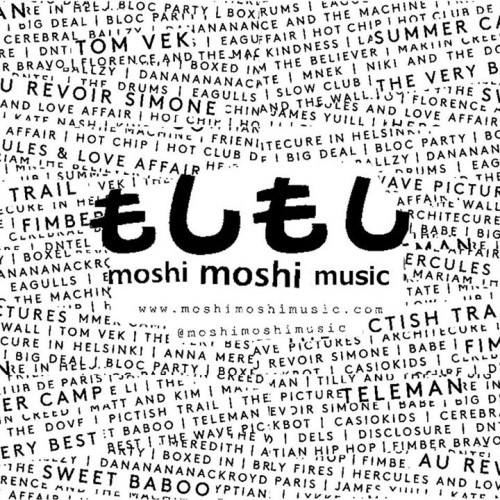 www.moshimoshimusic.com
Moshi Moshi Records started off as a hobby in 1998. Set up by three friends who had jobs working for major record labels. It was intended as a way of working with the bands that they loved but which didn’t fit in with the agenda of the day-job taskmasters. Early single releases from Zan Lyons, Kathryn Williams & Pedro and J Xaverre earned the label some plaudits. And sold a few records. Over the next five years Moshi Moshi slowly started to build a reputation for interesting, slightly leftfield, low-key releases. Then in 2004 things changed. For a start Moshi stopped being a hobby and became a fulltime job. Very soon after, Hot Chip and Bloc Party arrived and Moshi Moshi quickly became a name known to more than a few. Chart success followed with Yeti and The Rakes and higher-profile album releases from Architecture In Helsinki and Au Revoir Simone helped lift the label onto a new level. Then from 2006 onwards came artists such as Hot Club De Paris, Tilly And The Wall, The Wave Pictures, Slow Club, James Yuill, The Drums, Summer Camp, the list goes on.
In late 2006 the two remaining Moshi Moshi founders decided they wanted to get back to their one-off 7” release roots and the Moshi Moshi Singles Club was born. The intention was to try and release one 7” each month by a new up-and-coming artist. It would be limited to 1000 and only be available in a select group of indie stores. The artwork would be restricted to one colour and be designed by the bands themselves. Now some 40+ releases later the singles club’s roster makes an impressive list – (including) Kate Nash, Late of The Pier, Friendly Fires, Lykke Li, Florence and The Machine, Kindness, Dananananayckroyd. Disclosure. In 2011 Moshi Moshi expanded its remit by partnering up with some very talented young A&R folk to set up the imprints Tender Age, Not Even, Apricot and Dream Beach. Working under the Moshi Moshi umbrella these new labels have already yielded a clutch of exciting releases by artists from as far afield as Kenya and Seattle.
This label has been contributed by the users of the website. If you are the owner of the label, you can pass a verification procedure to manage this page yourself. Read more about the procedure here.